Will Autonomous Vehicles Have an Impact on Your Supply Chain?

Autonomous vehicles have attracted immense interest over the last few years, and with a slew of recent announcements from the major players, this interest is only growing. But will they impact your business? Phil Gibbs, executive director at software services company LLamasoft, gives his thoughts

There’s a huge amount of buzz in Silicon Valley about electric engines, ride-hailing and driverless cars, with Uber, Tesla and Waymo making waves.

Morgan Stanley see a major transformation taking place and recently predicted that Waymo, Alphabet’s autonomous driving unit, could be valued at $70bn by 2030.

The big car manufacturers see the opportunities and threats around autonomous vehicles and are acquiring businesses and developing technology themselves.

In the truck world, several businesses have been working on driverless vehicles. Rio Tinto has been using them at one of its iron-ore mines in Australia, quoting a performance improvement of 12%, and Volvo will soon begin testing a self-driving truck at a mine in Sweden.

Mercedes-Benz, Iveco and other manufacturers say that they have plans for autonomous vehicles. However, these will still need a driver and most commentators agree that fully autonomous vehicles will not be available until 2030, and take up may be uncertain in a fragmented industry.

So the practical people that work in supply chains may think that autonomous vehicles are a long way off and push them to the bottom of their list of considerations.

However, there are some interesting developments that could have an impact sooner than people think.

There was a trial of unmanned delivery vehicles in Greenwich, London, earlier this year by Ocado and Oxbotica of a self-driving zero emission delivery van, called CargoPod, operating in a residential environment.

Each truck carried up to 128kg of groceries in 8 delivery lockers, and the trial delivered orders to over one hundred customers. Another company, Starship Technologies, is developing and trialling a delivery robot with a 3 mile delivery radius.

If technologies such as these become widely adopted for final mile deliveries, they could lead to an increasing requirement for fulfilment centres in or near to urban areas due to their operating limits, although these could be overcome in the future.

The potential of autonomous long-distance trucking

Thinking about longer distance work, last year Uber acquired Otto, a self-driving truck start-up, although this is now the subject of a patent infringement lawsuit issued by Waymo.

However, this isn’t stopping development, as Uber launched a new truck with more sophisticated LIDOR laser sensors in July 2017. This is still driver-assisted, but it’s clear that the ultimate objective is self-guidance.

Automating transport on longer distance journeys that use interstate highways and motorways will present fewer challenges than the more unpredictable environment of urban road networks.

There should be significant cost savings from autonomous vehicles. Morgan Stanley estimates the potential savings to the US freight transportation industry at $168bn annually, made up from improved fuel consumption, reduced labour costs, improved productivity and reduced accidents.

Interestingly, the company believes that autonomous and semi-autonomous driving technology will be adopted far faster in the cargo markets than in passenger markets. Savings would be lower for semi-autonomous vehicles, but still significant.

“There should be significant cost savings from autonomous vehicles .”

A Swedish company, Einride, recently launched the T-Pod, an electric self-driving vehicle remotely controlled by drivers. T-Pods are 23 feet long and carry 15 pallets. The remote driver can monitor multiple T-Pods when they are on long distance work, but only a single T-Pod when they are on city roads.

When they are inactive and being charged en-route, the drivers will be monitoring vehicles that are in operation. Their ambition is to have 200 T-Pods operating between Gothenburg and Helsingborg by 2020. Einride says there will be cost benefits as well as safety improvements and environmental benefits, but it will be interesting to see how the economics work out.

The really interesting development is around ‘platooning’, which could dramatically reduce the cost of point to point linehaul journeys as vehicles are tethered together electronically. This would make it possible for one driver or crew to control a whole platoon for the long distance element of a journey, with the convoy being split and multiple drivers completing the last leg.

There is currently a trial in Western Australia where the lead truck in a convoy controls the others through vehicle-to-vehicle communication to synchronise speed and braking. Volkswagen Truck and Bus is also carrying out trials of platooning.

After initial testing at its site in Sweden, Scania is going to run a trail in Singapore, where truck platoons of four trucks are going to cover a distance of ten kilometres on public roads to transport containers between port terminals. The driver of the first truck will set the speed and direction, with the following three vehicles driving autonomously.

In Germany, MAN and logistics provider DB Schenker has formed a platooning partnership. It is planning to test platooning under realistic conditions over an extended period of time to gain meaningful data, with a platoon travelling on the A9 motorway between Munich and Nuremberg from 2018.

At this stage each truck in the platoon will have a driver to intervene in case of emergency, but it’s not hard to envisage a single driver controlling the platoon when the technology has been proven and legislation allows.

Silicon Valley is backing this concept as well. Earlier this year Peleton, a connected and automated vehicle startup company, completed a $60m funding round with investors including Omnitracs, Volvo and UPS.

Founded in 2011, Peloton says its platooning platform is designed to help fleets of trucks address three of the industry’s major challenges: safety, fuel consumption and operational efficiency. Research at MIT claimed that savings in fuel consumption through vehicles following in each other’s slipstream could be up to 20%, depending on the number of trucks in a convoy, and other studies quote up to 35%.

But of course the big cost saving would be with drivers. Drivers may need to be more technically qualified, and therefore paid more, but there would be a need for far fewer of them. The trucks will no doubt be more expensive, but this will be more than offset by other cost savings. 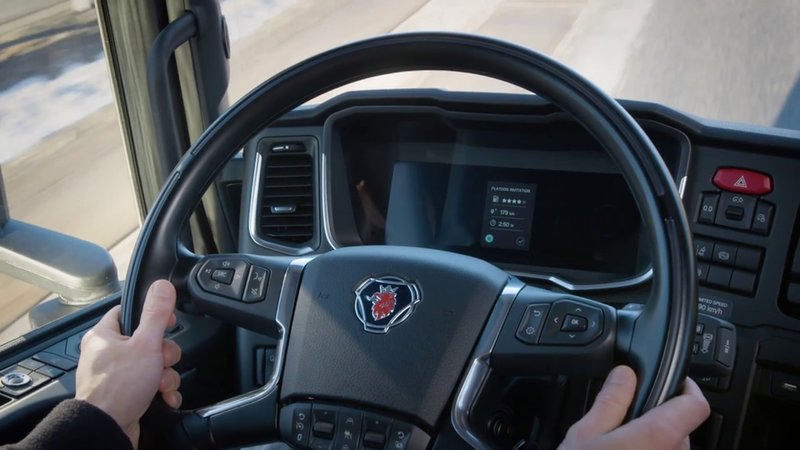 The impact of driverless trucks

Autonomously driving trucks should also generate a surge in capacity with no need for breaks, operating round the clock and maybe never having to return to base. Reduced congestion should also give productivity improvements, contributing to a significant reduction in the cost of transport.

Some commentators have remarked that the fragmented nature of the transport sector means that the take up of new technology will be slow due to the need for capital investment.

However, I think this investment requirement could lead to a consolidation of the sector by well capitalised companies – either existing operators or new entrants.

“A reduction in transport costs should lead to fewer, but larger, distribution centres and production plants.”

As the cost of transport reduces we could see a restructuring of supply chains. The design of a supply chain needs to take into account the relative costs of the different types of transportation, warehousing, production and sourcing.

Other things being equal, a reduction in transport costs should lead to fewer, but larger, distribution centres and production plants, although the pressure to have shorter lead times could work against this.

The only thing we can be certain of is that a significant shift in one of the cost elements in the supply chain should lead to a reconsideration of supply chain structures.