Rise of the Robotic Workforce

Meet the robot employee you can hire for €16 an hour

From manufacturing to public relations, humanoid robots are no longer just a part of the workplaces of the future, but are finding a place in the workplaces of today. Lucy Ingham hears from Matthias Krinke, managing director of pi4_robotics, about adding robots to the workforce

A robot employee is no longer the stuff of fiction. While large-scale factories have long made use of robotics, the idea of a salaried humanoid robot that works alongside staff in smaller factories has long seemed like merely a fantasy.

Now, however, it is a reality, offering not only quick and efficient work, but significant cost savings for both SMEs and larger companies. And at the heart of this revolution is pi4_robotics, a company based in Berlin, Germany, that not only makes and retails humanoid robots, but through its sister company Robozän, also hires them as staff.

“We developed workerbot, which is a humanoid factory worker, and in 2010 we offered the first version of that to the public,” explains pi4_robotics managing director Matthias Krinke.

Workerbot is a fully functioning robot, with a friendly, changeable face and arms which it uses to sort and inspect parts, lift items and perform other precise tasks. And while each workerbot is tailored to its specific role, like humans, they come in two basic forms.

While robots have traditionally been seen as pieces of equipment akin to computers, machines and other assets, pi4 is in the business of providing robotic employees, which work separate to but alongside their human colleagues.

Most workerbots can be found working in small factories and manufacturing facilities, but they can do other tasks as well, including giving presentations and lectures and even, in one case, moderating a televised debate.

It is no surprise, then, that pi4 is leading by example, with a workforce that is 91% human and 9% robot.

“We have 50 employees and five robots working here in the company,” explains Krinke.  “The robots do presentations, and they do work in the manufacturing process.”

humanoid Robots hired by the hour

Pi4_robotics isn’t the only company offering humanoid robots for such applications, but it is a major player in Germany and, more significantly, offers a service which may well be unique around the world.

“We have a sister company, Robozän, which is the first company where you can hire humanoid robots for work paid per hour,” says Krinke.

Marketed as a temporary employment agency for humanoid robots, the offering is impressive, as it provides opportunities to businesses on two fronts.

For those looking to affordably add a humanoid robot to their workforce, it provides a fully tailored robot that can be hired like a member of staff, without the high upfront costs normally required. Rates vary depending on the nature of the work, but for most positions the robots will cost the company €16 an hour.

For that you get a robot that is in many cases able to do the work of multiple people, never gets sick and can work 24 hours a day, seven days a week at quick speeds that meet the required cycle times of a fast-paced production schedule.

However, for companies looking to make a passive income, Robozän also offers a service where companies can buy a robot from pi4_robotics, and hire it out to other companies through Robozän. For this service, the owner receives €8.50 for each hour the robot works – the German minimum wage at the time the service was launched.

Through this system, Robozän nets the €7.50 difference, covering all the insurance, support and setup costs associated with the robot.

“We have to provide insurance for your robot; we have to bring the robot to the workplace; we have to teach the robot what to do; we have to look for new customers to hire the robot and things like that,” Krinke explains.

“You as an owner, you don't have to do anything else: just own the robot and then you make a five-year contract through the company, and through the five years they look for a job for the robot, they take care of it, and every month you get the salary for the robot.”

The cheapest workerbot pi4 currently offers on its website costs roughly €69,500, meaning that if a robot were to work 24/7, its owners could cover the cost of the investment in the first ten months of the five-year contract.

The offering is well tailored to Germany, a nation where SMEs make up 99.5% of enterprises, manufacturing is a key economic sector and there is a strong push for what is known as Industrie 4.0: a strategic initiative to establish the country as a leader in advanced manufacturing solutions.

As a result, many companies have already made use of the service, with workerbots now employed in a host of different roles.

“Mainly the robots are working in loading and unloading scenarios, and inspecting parts,” says Krinke. “In factories those are the main jobs that we a pursuing at the moment.

“We have a lot of applications in the plastics industry, a lot of our robots work with plastic moulding machines - that is one of our main focuses. One of the reasons is our robots are very quick into the job, and that's very important in the plastic moulding industry because they tend to produce for one week on the machine this product, and the next week something different.”

“We have a lot of applications in the plastics industry, a lot of our robots work with plastic moulding machines.”

One such example is Karl, a second-generation workerbot.

“Karl has been working since 2010 at a washing machine factory, and what he is doing there is grabbing plastic parts, inspecting them and packaging them into trays,” he says.

Karl’s job is quality control, ensuring that the plastic cover for the washing machine’s display is not scratched, damaged or dirty.

And while this may seem like a minor role, employing the robot has resulted in significant cost savings for the company.

“Karl has been working 24/7 since 2012,” adds Krinke. “Before the robot came here we had three people for each machine: three shifts of three people, so the robot has replaced six workers here.”

Together but apart: Collaborative Robots are not the answer

One of the big buzzwords in this field – coined in part to allay fears around such automation – is collaborative robots. However, Krinke is keen to stress that the vision of robots working alongside humans in the same space, akin to Fry and Bender in Futurama, is more of a PR concept than a feasible reality.

“Collaboration is at the moment, from my point of view, still something that needs a lot of research,” he says. “If they were to work very close together, then due to physics the robot would have to work quite slowly.”

With humans constantly in the robots area of work, it would need to repeatedly stop to ensure safety standards were maintained, because a human-robot collision could be incredibly dangerous.

“Even if you had a small robot, having something sharp in its hand would kill you,” he says. “Collaboration is only possible if it’s through circumstance, therefore we have uncollaborative robots because they have to do fast work in a short time.”

“Collaboration is at the moment, from my point of view, still something that needs a lot of research.”

In the future, Krinke says, it could become possible, but right now it would have too much of a negative impact on the production process.

“I think for real interesting collaboration in the industrial environment, we need much more time to have quicker sensory equipment and to have some kind of predictive sensors to understand what would happen to work fast enough,” he says, adding that cases where it does work at present largely involved lifting where time isn't such an issue.

“Usually for lifting heavy stuff, where the human is really grabbing the robot and having some kind of security switch in the hand, there it’s ok because it’s slower, because the main focus is on helping the human to lift something heavy. But if you put parts together, load a machine, then you really need to be quick; we're talking here about cycle times between 0.5 seconds and up to 15 seconds.” 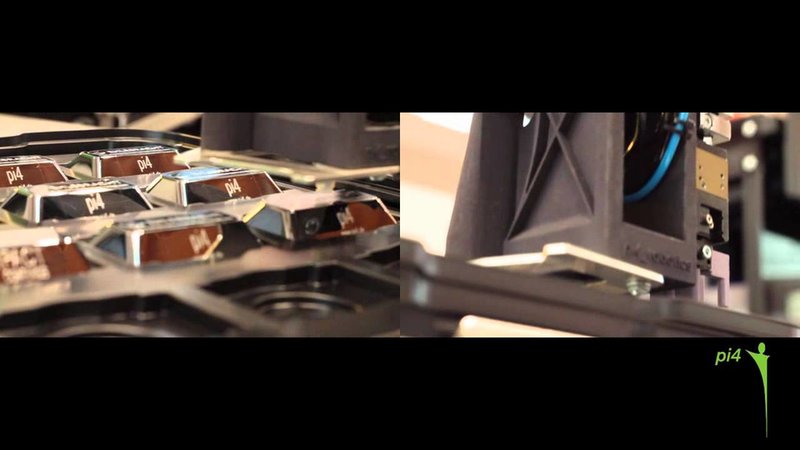 This doesn’t mean that the robots work hidden away from the humans: quite the opposite. They work in the same rooms as humans, but in their own fenced-off spaces, where they are part of the team but work separately on their own tasks.

As part of this, the robot is designed to be easy to understand, with a face that not only gives it a more human feel, but acts as an easy to understand indicator of the robot’s status, smiling when all is functioning correctly, and looking sad if it needs maintenance.

“The face is not only to have a nice personality, the face is also feedback for the robot, so everybody understands 'ok, this robot is looking happy',” he says. “You get immediate feedback of the situation in the setting and you don't need to read a manual.”

Furthermore, pi4 plans to add additional capabilities to its robots to aid this kind of easy interaction.

“At the moment we have no speech recognition integrated; we will have that at the end of the year, and next year the robot will be able to answer questions immediately and not only answers that are verified beforehand.”

For large companies, many of whom already have robots within their workforce, adding a workerbot can be a fairly run-of-the-mill practice. However, for small companies, it can be a big step, and Robozän’s service is designed to make this process as smooth as possible.

“At the moment we have one robot which will be delivered next week to a small company, it’s the first robot in the company, so therefore they have the emotional step to bring the robot into the company,” Krinke says. “I think it helps if you have a robot with a nice personality.

“And from a technical side we need to adapt the robot to the task and you need only a little change to the workspace. In small companies I think the emotional step to bring a robot in is a bit higher than in the big companies because they usually already have a robot and are used to it.”

“My experience is that the employees of the companies get a better feeling towards the robot, and they say 'ok, this is Karl' and everybody waves to Karl.”

An understandable concern for many companies is how their human employees will react to a new robotic co-worker. However, pi4 has designed the robots in such a way to encourage greater acceptance of their workerbots.

“It’s part of our marketing strategy to have humanoid robots with a gender. They also have names, the full name is given by the owner, and we ask them to do that,” he explains. “The idea is that if a company is hiring a robot or buying a robot then they ask their employees to discuss what the name of the robot will be and depending on if it’s a woman or a man then they decide the full name.”

While a minor effort, this has the powerful effect of humanising the robot, and giving its human colleagues a sense of ownership and companionship with it.

“My experience is that since we do that the employees of the companies get a better feeling towards the robot, and they say 'ok, this is Karl' and everybody waves to Karl and they are happy that he is there,” says Krinke. “So for the feeling of a human employee it’s better. It's a small thing, but it works.”